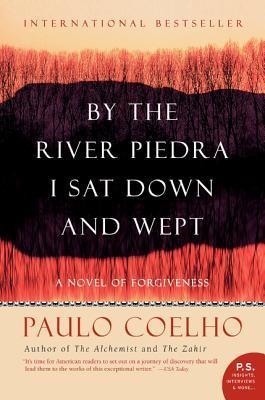 Since his novel "The Alchemist" appeared three years ago, Paulo Coelho has emerged from Latin America to become one of the world's most widely-read authors. With his unique, even magical ability to meld gripping action and powerful spiritual insight, his books have become world favorites, selling more than ten million copies in 47 countries and being translated into 23 languages.

"By the River Piedra I Sat Down and Wept" tells of Pilar, a frustrated scholar looking for some greater meaning in the endless cycle of her days. When a childhood friend contacts her, she is surprised to learn that her former playmate is now a charismatic spiritual leader, someone revered as a miracle worker. She is even more astonished when he reveals that Pilar has always been his great love.

Confused by this sudden opportunity for a new chance at life, Pilar gradually comes to realize that the man she loves is being called upon to choose between her and his spiritual calling. As the suffering lovers travel through sacred sites in the French Pyrenees, the difficult choice they face offers a startling revelation about the divine and the redemptive power of love. Full of warmth and wisdom, joy and unexpected sorrow, their story is a magical celebration of the endless possibilities that life has to offer, and a fable about opening your heart to miracles.

Paulo Coelho, born in Rio de Janeiro in 1947, is one of the bestselling and most influential authors in the world. The Alchemist, The Pilgrimage, The Valkyries, Brida, Veronika Decides to Die, Eleven Minutes, The Zahir, The Witch of Portobello, The Winner Stands Alone, Aleph, Manuscript Found in Accra, and Adultery, among others, have sold over 175 million copies worldwide, and The Alchemist has been on the New York Times bestseller list for over 360 weeks.

Paulo Coelho has been a member of the Brazilian Academy of Letters since 2002, and in 2007, he was appointed United Nations Messenger of Peace. He is also the most followed author on social media.
https://boabookstore.com/phan-biet-cac-loai-sach-paperback-hardcover-mass-market-paperback-deckle-edge-books

The Goldfinch by Donna Tartt

The Invisible Life of Addie LaRue by V E Schwab

The Prophet by Kahlil Gibran