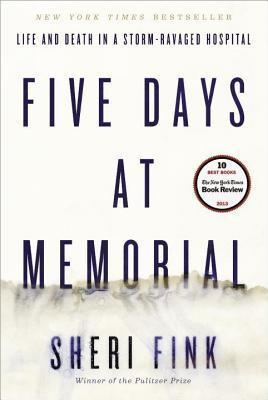 Pulitzer Prize winner Sheri Fink's landmark investigation of patient deaths at a New Orleans hospital ravaged by Hurricane Katrina - and her suspenseful portrayal of the quest for truth and justice. In the tradition of the best investigative journalism, physician and reporter Sheri Fink reconstructs 5 days at Memorial Medical Center and draws the reader into the lives of those who struggled mightily to survive and maintain life amid chaos.

After Katrina struck and the floodwaters rose, the power failed, and the heat climbed, exhausted caregivers chose to designate certain patients last for rescue. Months later, several of those caregivers faced criminal allegations that they deliberately injected numerous patients with drugs to hasten their deaths. Five Days at Memorial, the culmination of six years of reporting, unspools the mystery of what happened in those days, bringing the reader into a hospital fighting for its life and into a conversation about the most terrifying form of health care rationing. In a voice at once involving and fair, masterful and intimate, Fink exposes the hidden dilemmas of end-of-life care and reveals just how ill-prepared we are for the impact of large-scale disasters--and how we can do better. A remarkable book, engrossing from start to finish, Five Days at Memorial radically transforms your understanding of human nature in crisis. One of The New York Times' Best Ten Books of the Year

SHERI FINK is the author of the New York Times bestselling book, Five Days at Memorial: Life and Death in a Storm-Ravaged Hospital (Crown, 2013) about choices made in the aftermath of Hurricane Katrina. She is a correspondent at the New York Times, where her and her colleagues' stories on the West Africa Ebola crisis were recognized with the 2015 Pulitzer Prize for international reporting, the George Polk Award for health reporting, and the Overseas Press Club Hal Boyle Award. Her story "The Deadly Choices at Memorial," co-published by ProPublica and the New York Times Magazine, received a 2010 Pulitzer Prize for investigative reporting and a National Magazine Award for reporting. Her coverage of Hurricanes Sandy and Isaac in 2012 received the Mike Berger Award from Columbia University and the Beat Reporting Award from the Association of Healthcare Journalists. A former relief worker in disaster and conflict zones, Fink received her M.D. and Ph.D. from Stanford University. Her first book, War Hospital: A True Story of Surgery and Survival (PublicAffairs), is about medical professionals under siege during the genocide in Srebrenica, Bosnia-Herzegovina. Five Days at Memorial was the winner of the National Book Critics Circle Award for nonfiction, the PEN/John Kenneth Galbraith Award for nonfiction, the Ridenhour Book Prize, the J. Anthony Lukas Book Prize, the Los Angeles Times Book Prize, the Southern Independent Booksellers Alliance Book Award, the American Medical Writers Association Medical Book Award, and the NASW Science in Society Journalism Book Award. Find her on Twitter at @sherifink, Facebook at sherifinkbooks or visit her website at www.sherifink.net.
https://boabookstore.com/phan-biet-cac-loai-sach-paperback-hardcover-mass-market-paperback-deckle-edge-books