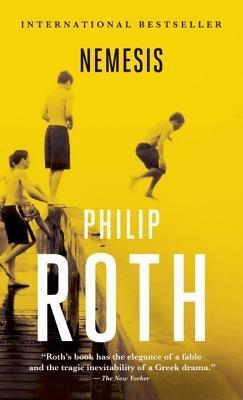 Set in a Newark neighborhood during a terrifying polio outbreak, Nemesis is a wrenching examination of the forces of circumstance on our lives.

Bucky Cantor is a vigorous, dutiful twenty-three-year-old playground director during the summer of 1944. A javelin thrower and weightlifter, he is disappointed with himself because his weak eyes have excluded him from serving in the war alongside his contemporaries. As the devastating disease begins to ravage Bucky’s playground, Roth leads us through every inch of emotion such a pestilence can breed: fear, panic, anger, bewilderment, suffering, and pain. Moving between the streets of Newark and a pristine summer camp high in the Poconos, Nemesis tenderly and startlingly depicts Cantor’s passage into personal disaster, the condition of childhood, and the painful effect that the wartime polio epidemic has on a closely-knit, family-oriented Newark community and its children.

In 1997 Philip Roth won the Pulitzer Prize for American Pastoral. In 1998 he received the National Medal of Arts at the White House and in 2002 the highest award of the American Academy of Arts and Letters, the Gold Medal in Fiction. He twice won the National Book Award and the National Book Critics Circle Award. He won the PEN/Faulkner Award three times. In 2005 The Plot Against America received the Society of American Historians’ Prize for “the outstanding historical novel on an American theme for 2003–2004.” Roth received PEN’s two most prestigious awards: in 2006 the PEN/Nabokov Award and in 2007 the PEN/Bellow Award for achievement in American fiction. In 2011 he received the National Humanities Medal at the White House, and was later named the fourth recipient of the Man Booker International Prize. He died in 2018.
https://boabookstore.com/phan-biet-cac-loai-sach-paperback-hardcover-mass-market-paperback-deckle-edge-books