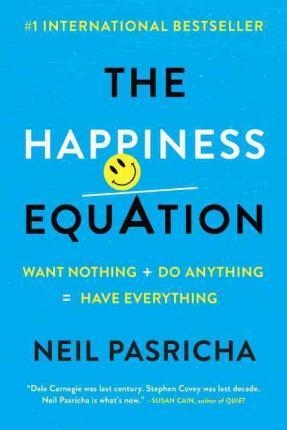 The Happiness Equation: Want Nothing + Do Anything=Have Everything by Neil Pasricha

The new book from the New York Times-bestselling author of The Book of Awesome that "reveals how all of us can live happier lives" (Gretchen Rubin).

What is the formula for a happy life? Neil Pasricha is a Harvard MBA, a New York Times-bestselling author, a Walmart executive, a father, a husband. After selling more than a million copies of the Book of Awesome series, wherein he observed the everyday things he thought were awesome, he now shifts his focus to the practicalities of living an awesome life. In his new book The Happiness Equation, Pasricha illustrates how to want nothing and do anything in order to have everything. If that sounds like a contradiction in terms, you simply have yet to unlock the 9 Secrets to Happiness. Each secret takes a piece out of the core of common sense, turns it on its head to present it in a completely new light, and then provides practical and specific guidelines for how to apply this new outlook to lead a fulfilling life. Once you've unlocked Pasricha's 9 Secrets, you will understand counterintuitive concepts such as: Success Does Not Lead to Happiness, Never Take Advice, and Retirement Is a Broken Theory. You will learn and then master three brand-new fundamental life tests: the Saturday Morning Test, The Bench Test, and the Five People Test. You will know the difference between external goals and internal goals and how to make more money than a Harvard MBA (hint: it has nothing to do with your annual salary). You will discover that true wealth has nothing to do with money, multitasking is a myth, and the elimination of options leads to more choice.

The Happiness Equation is a book that will change how you think about pretty much everything--your time, your career, your relationships, your family, and, ultimately, of course, your happiness.

Neil Pasricha is the New York Times-bestselling author of The Happiness Equation and the Book of Awesome series, which has been published in ten countries, spent more than five years on bestsellers lists, and sold more than a million copies. Pasricha is a Harvard MBA, one of the most popular TED speakers of all time, and founder of the Institute for Global Happiness. He has dedicated the past fifteen years of his life to developing leaders--creating global programs inside the world's largest companies and speaking to hundreds of thousands of people around the world. He lives in Toronto with his wife and son.

Joy at Work: Organizing Your Professional Life by

Everything Is F*cked by

The Wisdom of Sundays: Life-Changing Insights from Super Soul Conversations by Oprah Winfrey

You Are a Bada**: How to Stop Doubting Your Greatness and Start Living An Awesome Life by Jen Sincero