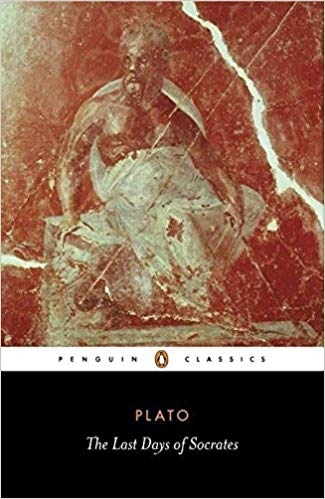 The Last Days Of Socrates (Penguin Classics) by Plato

Chronicling the life and death of the father of western philosophy, and charting his influence on the most influential ancient Greek philosophers, Plato's The Last Days of Socrates is translated from the Greek by Hugh Tredennick, revised with an introduction and notes by Harold Tarrant in Penguin Classics.

The trial and condemnation of Socrates on charges of heresy and corrupting young minds is a defining moment in the history of Classical Athens. In tracing these events through four dialogues, Plato also developed his own philosophy, based on Socrates' manifesto for a life guided by self-responsibility. Euthyphro finds Socrates outside the court-house, debating the nature of piety, while the Apology is his robust rebuttal of the charges of impiety and a defence of the philosopher's life. In the Crito, while awaiting execution in prison, Socrates counters the arguments of friends urging him to escape. Finally, in the Phaedo, he is shown calmly confident in the face of death, skilfully arguing the case for the immortality of the soul.

Hugh Tredennick's landmark 1954 translation has been revised by Harold Tarrant, reflecting changes in Platonic studies, with an introduction and expanded introductions to each of the four dialogues.

Plato (c.427-347 BC) stands with Socrates and Aristotle as one of the shapers of the whole intellectual tradition of the West. He founded the Academy in Athens, the first permanent institution devoted to philosophical research and teaching, and the prototype of all Western universities.

If you enjoyed The Last Days of Socrates, you might like Plato's The Symposium, also available in Penguin Classics.

Plato (c.427-347 BC) stands with Socrates and Aristotle as one of the shapers of the whole intellectual tradition of the West. He founded the Athenian Academy, the first permanent institution devoted to philosophical research and teaching, and the prototype of all Western universities.
https://boabookstore.com/phan-biet-cac-loai-sach-paperback-hardcover-mass-market-paperback-deckle-edge-books

The Unhappiness of Being a Single Man: Essential Stories (Pushkin Collection) by Franz Kafka

Sophie's World: A Novel About the History of Philosophy (FSG Classics) by Jostein Gaarder