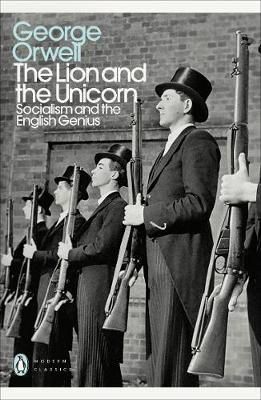 The Lion and the Unicorn : Socialism and the English Genius by George Orwell

George Orwell's moving reflections on the English character and his passionate belief in the need for political change.

The Lion and the Unicorn was written in London during the worst period of the blitz. It is vintage Orwell, a dynamic outline of his belief in socialism, patriotism and an English revolution. His fullest political statement, it has been described as 'one of the most moving and incisive portraits of the English character' and is as relevant now as it ever has been.

Eric Arthur Blair (1903-1950), better known by his pen-name, George Orwell, was born in India, where his father worked for the Civil Service. An author and journalist, Orwell was one of the most prominent and influential figures in twentieth-century literature. His unique political allegory Animal Farm was published in 1945, and it was this novel, together with the dystopia of Nineteen Eighty-Four (1949), which brought him world-wide fame. His novels and non-fiction include Burmese Days, Down and Out in Paris and London, The Road to Wigan Pier and Homage to Catalonia.