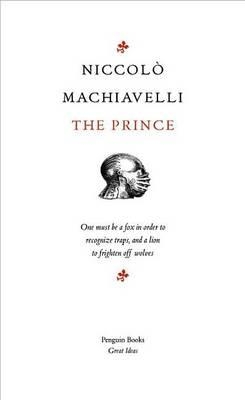 Rejecting the traditional values of political theory, Machiavelli drew upon his own experiences of office in the turbulent Florentine republic to write his celebrated treatise on statecraft. While Machiavelli was only one of the many Florentine "prophets of force," he differed from the ruling elite in recognizing the complexity and fluidity of political life. Throughout history, some books have changed the world. They have transformed the way we see ourselves--and each other. They have inspired debate, dissent, war and revolution. They have enlightened, outraged, provoked and comforted. They have enriched lives--and destroyed them. Now, Penguin brings you the works of the great thinkers, pioneers, radicals and visionaries whose ideas shook civilization, and helped make us who we are. Penguin's Great Ideas series features twelve groundbreaking works by some of history's most prodigious thinkers, and each volume is beautifully packaged with a unique type-drive design that highlights the bookmaker's art. Offering great literature in great packages at great prices, this series is ideal for those readers who want to explore and savor the Great Ideas that have shaped the world.

Niccolò Machiavelli (1469-1527) was a Florentine statesman who was later forced out of public life. He then devoted himself to studying and writing political philosophy, history, fiction, and drama.
https://boabookstore.com/phan-biet-cac-loai-sach-paperback-hardcover-mass-market-paperback-deckle-edge-books

How Democracies Die by Steven Levitsky

The Future Is Asian by Parag Khanna

Identity: The Demand for Dignity and the Politics of Resentment by Francis Fukuyama

On China by Henry Kissinger

The Color of Law: A Forgotten History of How Our Government Segregated America by Richard Rothstein

Justice: What's the Right Thing to Do? by Michael J. Sandel