Catfish and Mandala : A 2 Wheeled Voyage through the Landscape and Memory of Vietnam Hiệu Sách Ngoại Văn BOA Bookstore
10 out of 10 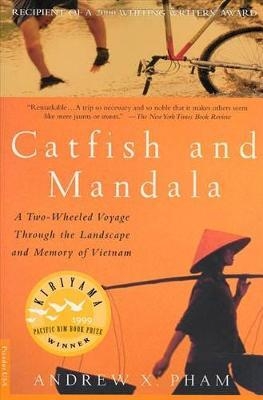 Catfish and Mandala : A 2 Wheeled Voyage through the Landscape and Memory of Vietnam

Catfish and Mandala is the story of an American odyssey--a solo bicycle voyage around the Pacific Rim to Vietnam--made by a young Vietnamese-American man in pursuit of both his adopted homeland and his forsaken fatherland. Intertwined with an often humorous travelogue spanning a year of discovery is a memoir of war, escape, and ultimately, family secrets.

Andrew X. Pham was born in Vietnam and raised in California. His father had been a POW of the Vietcong; his family came to America as boat people. Following the suicide of his sister, Pham quit his job, sold all of his possessions, and embarked on a year-long bicycle journey that took him through the Mexican desert; on a thousand-mile loop from Narita in South Korea to Kyoto in Japan; and, after five months and 2,357 miles, to Saigon, where he finds nothing familiar in the bombed-out darkness. In Vietnam, he's taken for Japanese or Korean by his countrymen, except, of course, by his relatives, who doubt that as a Vietnamese he has the stamina to complete his journey (Only Westerners can do it); and in the United States he's considered anything but American. A vibrant, picaresque memoir written with narrative flair and an eye-opening sense of adventure, Catfish and Mandala is an unforgettable search for cultural identity.

The Diving Bell and the Butterfly : A Memoir of Life in Death

Too Much and Never Enough : How My Family Created the World's Most Dangerous Man