Hirohito And The Making Of Modern Japan 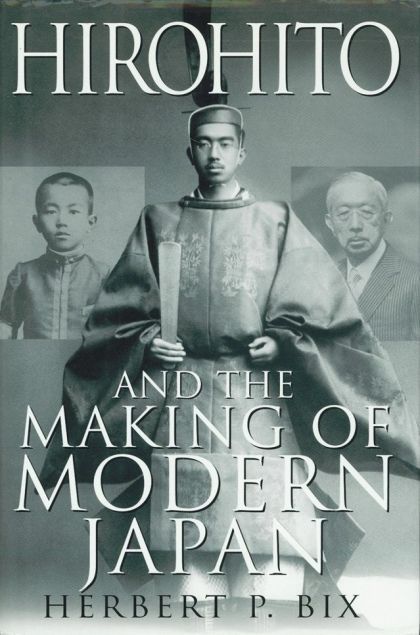 Hirohito was born a hundred years ago. He entered a world that Queen Victoria had barely exited, where Hapsburgs, Hohenzollerns, and Romanoffs disported themselves, and Americans, insofar as they thought about the Japanese at all, saw them as a quaint but go-ahead people who promised to act as a check on the Russian colossus. He was thought a rather unprepossessing heir to the throne. Almost ninety years later, that same unprepossessing Hirohito was still on his throne, having survived intervening wars and convulsions - long outlasting the great European royal houses - while the Americans had realized that Japan really could be a stabilising force in the Far East.

A book that tells, and tells convincingly, and largely from primary sources, how Hirohito and his nation came through such events can only be a tour de force. Such a book is Herbert Bix's Hirohito and the Making of Modern Japan.

The protean Hirohito operated originally under the Meiji Constitution, bequeathed by his grandfather, which defined the Emperor as a living god descended in an unbroken line from Ameratsu, the Sun Goddess. It gave him extraordinary powers, but as a practical matter he mainly operated to harmonize and legitimize the policies of the cabinet and of the unruly armed services who had direct access to him. He reigned, rather than ruled, but exercised real influence behind the scenes. During the late 1920s and early 1930s he often skated on thin ice, endangered by the fanatics in the Japanese armed services. He acquiesced in the Japanese state becoming increasingly militarized and prone to solve its problems by grabbing parts of China, and other foreign territory.

When this course eventually led to a disastrous defeat at the hands of the United States, Hirohito desperately needed to fashion a legend to show that he had been blameless in the matter, impotent to influence the actions of the state. No war criminal! And he got away with it, with the connivance of one of the master legend-makers among the victorious Americans, Douglas MacArthur, who wanted to simplify the problems of occupying Japan. Anxious for a moderate Japanese regime, Washington approved preserving the monarchy. This, of course, is pretty rich stuff, even involving on some level the cynical observation that on most days a comfortable lie is at least as good as an uncomfortable truth.

The legend depended on the role Hirohito played in the seizure of Manchuria and the China Incident; in the decision for war against the United States, Britain and Holland; and in the eventual surender in August 1945. Bix lays out impressive evidence of the Emperor's involvement in events in Manchuria and China. He shows that any disagreement by Hirohito with the policies of expansion was strictly tactical. Although the initial Manchurian aggression was an unauthorized action by the local army, Hirohito specifically authorized subsequent moves. He volunteered advice on military aspects, for he had been given an intensive grounding in military science and took a lively interest in the campaigns. He was extremely well-briefed and no doubt would have learned of the excesses committed during the capture of Nanking. He was probably knowledgeable of the scorching of the Chinese countryside and of biological and chemical warfare initiatives. Unless explained away, this record would have been enough to qualify him, in American eyes, as a war criminal.

He went on to be a war leader, who, after fortune deserted the imperial forces, didn't hesitate to criticize them, favor them with suggestions, and nag them to do something to reverse the tide. He thought, mistakenly, that in the Philippines Leyte would be a better place to fight than Luzon.

Most histories gave Hirohito high marks for overruling his military chiefs and ordering acceptance of the Allied surrender terms. Bix observes that had he acted earlier, he would have avoided the destruction of Hiroshima and Nagasaki, and the expenditure of thousands of lives. Instead he waited until the bombs went off, until the Soviets dashed his hopes of using them for intermediaries, and until the Americans hinted that they might preserve the monarchy. His failure to act gave the American victors the options of abolishing the monarchy, declaring Hirohito a war criminal, or forcing his abdication.

The Allied governments and American popular opinion favored trying the Emperor. The alternatives chosen were to sanitize him by portraying him as having been powerless to oppose the militarists; to pursue democratic reforms in Japanese society by working through existing authorities, and thereby simplify the occupation. MacArthur hoped that a slick performance by him in Japan could be parlayed into a successful run at the American presidency. So the Emperor survived under a new constitution as the constitutional monarch he pretended to be under the old. But he was never comfortable with his diminished role.

In the postwar world the myth of the pacifist, powerless Emperor enshrined in official American accounts inevitably came under scrutiny. Leftist groups in Japan perceived the monarchy, even in its denatured form, as still a prop of the conservatives. Others believed that declaring the Emperor blameless encouraged the Japanese in general to conclude they too had nothing to atone for from the war years. Therefore, Japan hadn't really fully come to terms with its past transgressions. Something was still owed to the victims beyond what had been granted under the Peace Treaty. The factual basis for the Emperor myth had always been thin since Japanese officials had made a bonfire of important records before the Americans had got established in Tokyo, and the testimony of his loyal associates in the war crimes trials exonerated the sovereign of any wrongdoing.