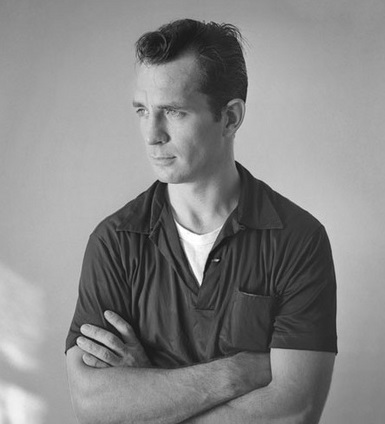 Jack Kerouac was an American writer best known for the novel On the Road, which became an American classic, pioneering the Beat Generation in the 1950s.

While enjoying popular but little critical success during his own lifetime,Kerouac is now considered one of America's most important authors. Kerouac's spontaneous, confessional language style inspired other writers, including Richard Brautigan, Hunter S. Thompson, and Bob Dylan.

Most of his life was spent in the vast landscapes of America or in the apartment of his mother, with whom he lived most of his life. Faced with a changing country, Kerouac sought to find his place, eventually bringing him to reject the values of the fifties. His writing often reflects a desire to break free from society's mold and to find meaning in life. This search may have led him to experiment with drugs, to study spiritual teachings such as Buddhism, and to embark on trips around the world. His books are sometimes credited as the catalyst for the 1960s counterculture. Kerouac's best known works are  The Dharma Bums.

Kerouac wrote constantly, but did not publish his novel, On the Road, until 1957. It was published by Viking Press. Narrated from the point of view of the character Sal Paradise, this mostly autobiographical work of fiction described his roadtrip adventures across the United States and into Mexico with Neal Cassady, the model for Dean Moriarty in the book. In a way, the story is an offspring of Mark Twain's classic Huckleberry Finn, though in On the Road the narrator (Sal Paradise) is twice Huck's age, and Kerouac's story is set in the America of about a hundred years after. The novel is often described as the defining work of the post-World War II jazz, poetry, and drug affected Beat Generation; it made Kerouac "the king of the beat generation." Using Benzedrine and coffee, Kerouac wrote the entire novel in only three weeks in an extended session of spontaneous prose, his original writing style, heavily influenced by Jazz (especially Bebop), and later Buddhism. Kerouac was hailed as a major American writer, and reluctantly as the voice of the Beat Generation. His fame would come as an unmanageable surge that would ultimately be his undoing.

He died on October 21, 1969 at St. Anthony's Hospital in St. Petersburg, Florida, from an internal hemorrhage caused by cirrhosis of the liver at the age of 47, the unfortunate result of a life of heavy drinking. He was living at the time with his third wife Stella, and his mother Gabrielle. He is buried in his home town of Lowell.