'Mastering the Market Cycle’: The Dangers of Optimism - The Wall Street Journal 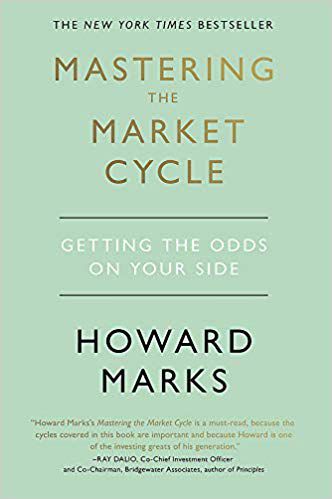 Amid so much purportedly expert investment advice, it is worth asking who the experts themselves listen to. One answer, undoubtedly, is Howard Marks, among the world’s most successful investment managers as well as an intellectual leader of the profession. His client memos are widely distributed among investment professionals. “When I see memos from Howard Marks in my mail,” Warren Buffett has said, “they’re the first thing I open and read. I always learn something.”

In 2011 Mr. Marks published “The Most Important Thing,” which comprised 20 investment insights culled from these memos. In “Mastering the Market Cycle,” he focuses on what he regards as one of his most important insights: “If we study past cycles, understand their origins and import, and keep alert for the next one, . . . we can master these recurring patterns for our betterment.”

It is not surprising that Mr. Marks considers mastering the market cycle so important. While most investors avoid market timing, it is in fact timing that has accounted for Mr. Marks’s success. During the 2007-09 market meltdown, he had the foresight to set up an $11 billion distressed-debt fund—aimed at buying the financial instruments of companies near or currently in bankruptcy. It was the largest such fund in history. Following the collapse of Lehman Brothers in September 2008, he began putting the money to work. According to Bloomberg, his distressed-debt funds returned 19% per annum after fees, a record that far outdistanced his peers.

Looking back on this period in a podcast, Mr. Marks described his thinking in this way: “All you had to do to make money in the crisis was have money to spend and the nerve to spend it. You didn’t need caution, conservatism, risk control, patience, selectivity, discipline, any of those things. All you needed was money and nerve. But not all the time, because sometimes money and nerve will get you killed. One of the keys to investing is to know which is which.”

Mr. Marks acknowledges that there are no real cycles in the market, and he has no illusions that he can make macroeconomic forecasts. He admits that he can never call market tops and bottoms or predict how far prices will fluctuate. But he believes that he can understand fluctuations in investors’ attitudes toward risk. Price declines tend to increase risk aversion and send investors to the sidelines just as prices (and actual risk) are at their lowest. The opposite effects can be seen when prices rise. “The greatest source of investment risk” is not, he writes, “negative economic developments” but “when risk aversion and caution evaporate.”

“Mastering the Market Cycle” comes down to the insights of behavioral finance. We know that investors tend to put money into the market at tops, when everyone is optimistic, and take the money out at bottoms, when panic is widespread. The key to investment success is to do the opposite and keep one’s emotions—aggressiveness and defensiveness—in balance. Mr. Marks’s recipe for success is much like that of Mr. Buffett, who has said that investors should be “fearful when others are greedy and greedy when others are fearful.”

In his longest chapter, Mr. Marks explains how he was able to profit from the events leading up to the 2008 market meltdown. His analysis closely parallels the theories of the late economist Hyman Minsky. Good times lead to overly optimistic forecasts and a loosening of credit standards. Excessive debt leads to a wave of defaults at the first signs of economic turmoil and ultimately to a market meltdown. The Minsky theory is that stability itself breeds behavior that leads to instability. As he put it: “The longer things are stable, the more unstable they will be when the crisis hits.”

Mr. Marks shows how good times from 2005 to 2008 caused investors to become so optimistic that they jettisoned caution and settled for skimpy premiums on risky investments. “The greatest source of investment risk,” he says, “is the belief that there is no risk.” When prices start to decline, investors panic and risk aversion goes from inadequate to excessive. Thus the reward for bearing risk is greatest just when people refuse to bear it. “The fluctuation—or inconstancy—in attitudes toward risk,” Mr. Marks writes, is “the cause or exacerbator” of cycles. At the bottom of the market lenders refuse to offer credit even to credit-worthy borrowers.

The volatility in the credit markets is equally evident in the real-estate and stock markets. The dot-com bubble of the late 1990s, when high-tech stocks sold at unprecedented triple-digit earnings multiples, and the real-estate bubble of the early 2000s bear witness to similar patterns of euphoria and depression.

“Mastering the Market Cycle” is not a perfect book. It is overlong and tends to be repetitious. But it is wise. A careful reading can make us better investors and protect us from the all too frequent errors that ruin investment results. I do worry, however, that the book may encourage some readers to engage in market timing. Few investors have the insight and ability of Howard Marks, who has been unusually skilled in his analysis of where we are in the market “cycle.” For many investors the takeaway should be: “Don’t try this at home.” Fortunately, Mr. Marks has included a chapter titled “Limits on Coping,” which says that, however important it may be to understand the market cycle, “it’s essential that you also understand the limitations, as well as the skills that are required and how difficult it is.”

Perhaps the smartest thing an ordinary investor can do is to engage in periodic rebalancing of a diversified portfolio. If one asset becomes so richly valued that it comes to represent a disproportionately large share of the portfolio, then reduce its weighting and place the proceeds in underweighted assets. Such rebalancing may not be “mastery” in the fullest sense, but it will generally reduce risk and often enhance a portfolio’s return.

Howard Stanley Marks (born April 23, 1946) is an American investor and writer. After working in senior positions at Citibank early in his career, Marks joined TCW in 1985 and created and led the High Yield, Convertible Securities and Distressed Debt groups. In 1995, he left TCW and co-founded Oaktree Capital Management. In the 2017 Forbes rankings of the wealthiest Americans, Marks was ranked the #374 richest person in the United States, with a net worth of $1.91 billion.