Mein Kampf or The Rise of Adolf Hitler 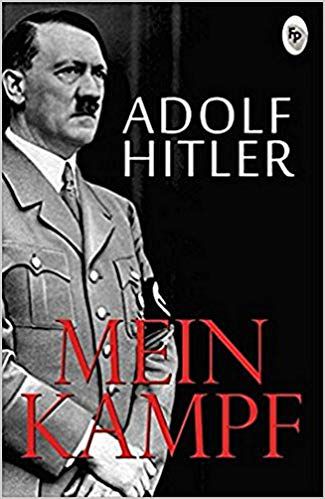 Although it is thought of as having been 'written' by Hitler, Mein Kampf is not a book in the usual sense. Hitler never actually sat down and pecked at a typewriter or wrote longhand, but instead dictated it to Rudolf Hess while pacing around his prison cell in 1923-24 and later at an inn at Berchtesgaden.

Reading Mein Kampf is like listening to Hitler speak at length about his youth, early days in the Nazi Party, future plans for Germany, and ideas on politics and race.

The original title Hitler chose was "Four and a Half Years of Struggle against Lies, Stupidity and Cowardice." His Nazi publisher knew better and shortened it to "Mein Kampf," simply My Struggle, or My Battle.

In his book, Hitler divides humans into categories based on physical appearance, establishing higher and lower orders, or types of humans. At the top, according to Hitler, is the Germanic man with his fair skin, blond hair and blue eyes. Hitler refers to this type of person as an Aryan. He asserts that the Aryan is the supreme form of human, or master race.

And so it follows in Hitler's thinking, if there is a supreme form of human, then there must be others less than supreme, the Untermenschen, or racially inferior. Hitler assigns this position to Jews and the Slavic peoples, notably the Czechs, Poles, and Russians.

In Mein Kampf, Hitler states: "...it [Nazi philosophy] by no means believes in an equality of races, but along with their difference it recognizes their higher or lesser value and feels itself obligated to promote the victory of the better and stronger, and demand the subordination of the inferior and weaker in accordance with the eternal will that dominates this universe."

Hitler then states the Aryan is also culturally superior.

"All the human culture, all the results of art, science, and technology that we see before us today, are almost exclusively the creative product of the Aryan..."

"Hence it is no accident that the first cultures arose in places where the Aryan, in his encounters with lower peoples, subjugated them and bent them to his will. They then became the first technical instrument in the service of a developing culture."

Hitler goes on to say that subjugated peoples actually benefit by being conquered because they come in contact with and learn from the superior Aryans. However, he adds they benefit only as long as the Aryan remains the absolute master and doesn't mingle or inter-marry with inferior conquered peoples.

But it is the Jews, Hitler says, who are engaged in a conspiracy to keep this master race from assuming its rightful position as rulers of the world, by tainting its racial and cultural purity and even inventing forms of government in which the Aryan comes to believe in equality and fails to recognize his racial superiority.

"The mightiest counterpart to the Aryan is represented by the Jew."

Hitler describes the struggle for world domination as an ongoing racial, cultural, and political battle between Aryans and Jews. He outlines his thoughts in detail, accusing the Jews of conducting an international conspiracy to control world finances, controlling the press, inventing liberal democracy as well as Marxism, promoting prostitution and vice, and using culture to spread disharmony.

"...for the higher he climbs, the more alluring his old goal that was once promised him rises from the veil of the past, and with feverish avidity his keenest minds see the dream of world domination tangibly approaching."

This conspiracy idea and the notion of 'competition' for world domination between Jews and Aryans would become widespread beliefs in Nazi Germany and would even be taught to school children.

This, combined with Hitler's racial attitude toward the Jews, would be shared to varying degrees by millions of Germans and people from occupied countries, so that they either remained silent or actively participated in the Nazi effort to exterminate the entire Jewish population of Europe.

Mein Kampf also provides an explanation for the military conquests later attempted by Hitler and the Germans. Hitler states that since the Aryans are the master race, they are entitled simply by that fact to acquire more land for themselves. This Lebensraum, or living space, will be acquired by force, Hitler says, and includes the lands to the east of Germany, namely Russia. That land would be used to cultivate food and to provide room for the expanding Aryan population at the expense of the Slavic peoples, who were to be removed, eliminated, or enslaved.

But in order to achieve this, Hitler states, Germany must first defeat its old enemy France, to avenge the German defeat of World War I and to secure the western border. Hitler bitterly recalls the end of the First World War, saying the German Army was denied its chance for victory on the battlefield by political treachery at home. In the second volume of Mein Kampf he attaches most of the blame to Jewish conspirators in a highly menacing and ever more threatening tone.

When Mein Kampf was first released in 1925 it sold poorly. People had been hoping for a juicy autobiography or a behind-the-scenes story of the Beer Hall Putsch. What they got were hundreds of pages of long, hard to follow sentences and wandering paragraphs composed by a self-educated man.

However, after Hitler became Chancellor of Germany, millions of copies were sold. It was considered proper to own a copy and to give one to newlyweds, high school graduates, or to celebrate any similar occasion. But few Germans ever read it cover to cover. Although it made him rich, Hitler would later express regret that he produced Mein Kampf, considering the extent of its revelations.

Those revelations concerning the nature of his character and his blueprint for Germany's future served as a warning to the world. A warning that was mostly ignored.