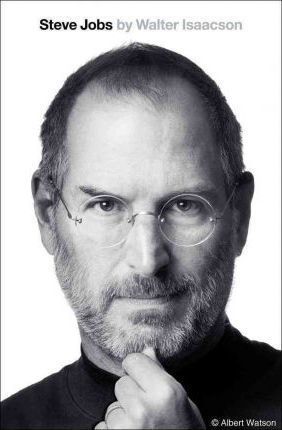 Perhaps the funniest passage in Walter Isaacson's monumental book about Steve Jobs comes three quarters of the way through. It is 2009 and Jobs is recovering from a liver transplant and pneumonia. At one point the pulmonologist tries to put a mask over his face when he is deeply sedated. Jobs rips it off and mumbles that he hates the design and refuses to wear it. Though barely able to speak, he orders them to bring five different options for the mask so that he can pick a design he likes. Even in the depths of his hallucinations, Jobs was a control-freak and a rude sod to boot. Imagine what he was like in the pink of health. As it happens, you don't need to: every discoverable fact about how Jobs, ahem, coaxed excellence from his co-workers is here.

As Isaacson makes clear, Jobs wasn't a visionary or even a particularly talented electronic engineer. But he was a businessman of astonishing flair and focus, a marketing genius, and – when he was getting it right, which wasn't always – had an intuitive sense of what the customer would want before the customer had any idea. He was obsessed with the products, rather than with the money: happily, as he discovered, if you get the products right, the money will come.

Did you know that the Apple Macintosh was nearly called the Apple Bicycle? Or that so obsessed was Jobs with designing swanky-looking factories (white walls, brightly coloured machines) that he kept breaking the machines by painting them – for example bright blue?

As well as being a sort-of-genius, Jobs was a truly weird man. As a young man, he was once put on the night-shift so co-workers wouldn't have to endure his BO. (Jobs was convinced his vegan diet meant he didn't need to wear deodorant or shower more than once a week.) He was perpetually shedding his shoes, and sometimes, to relieve stress, soaked his feet in the toilet. His on-off veganism was allied to cranky theories about health. When he rebuked the chairman of Lotus Software for spreading butter on his toast ("Have you ever heard of serum cholesterol?"), the man responded: "I'll make you a deal. You stay away from commenting on my dietary habits, and I will stay away from the subject of your personality."

That personality. An ex-girlfriend – and one, it should be said, who was very fond of him – told Isaacson that she thought Jobs suffered from narcissistic personality disorder. Jobs's personal life is sketchily covered, but what details there are don't charm. When he got an on/off girlfriend pregnant in his early 20s, he cut her off and aggressively denied paternity – though he later, uncharacteristically, admitted regretting his behaviour and sought to build a relationship with his daughter. (Jobs himself was adopted, and seems to have had what Americans call "issues around abandonment".)

He cheated his friends out of money. He cut old colleagues out of stock options. He fired people with peremptoriness. He bullied waiters, insulted business contacts and humiliated interviewees for jobs. He lied his pants off whenever it suited him – "reality distortion field" is Isaacson's preferred phrase. Like many bullies, he was also a cry-baby. Whenever he was thwarted – not being made "Man of the Year" by Time magazine when he was 27, for instance – he burst into tears.

As for critiquing the work of others, Jobs's analytical style was forthright: "too gay" (rabbit icon on desktop); "a shithead who sucks" (colleague Jef Raskin); "fucking dickless assholes" (his suppliers); "a dick" (the head of Sony music); "brain-dead" (mobile phones not made by Apple).

Nowadays we are taught that being nice is the way to get on. Steve Jobs is a fine counter-example. In 2008, when Fortune Magazine was on the point of running a damaging article about him, Jobs summoned their managing editor to Cupertino to demand he spike the piece: "He leaned into Serwer's face and asked, 'So, you've uncovered the fact that I'm an asshole. Why is that news?'"